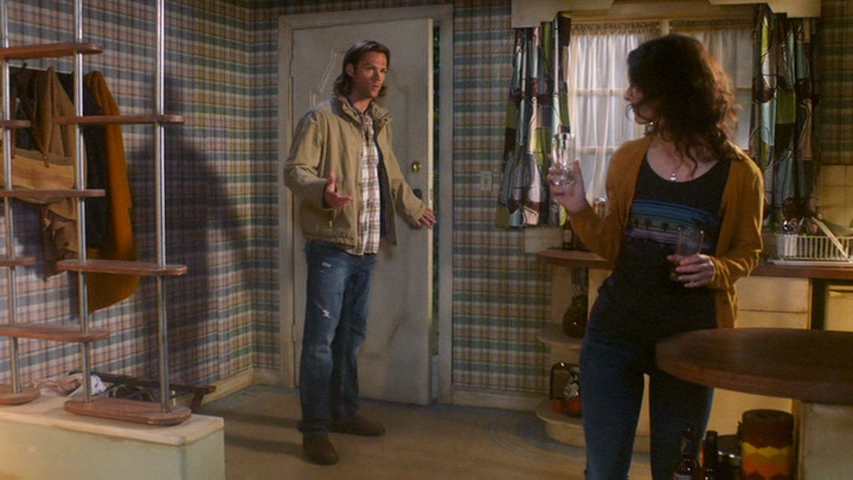 Sam: "So, uh? So what now?"
Amelia: "I don't know, do you want to talk about it?"
Sam: "What, last night?"
Amelia: "No, Dean, you pervert."
Sam: "Yeah, yeah, I'd like that. Do you want to talk about Don?... hey, hey, I'd like that too."
- I'm still of the opinion that Don was the last thing that Amelia wanted to talk about and that she didn't really want to talk about Dean either, and that she was asking if Sam wanted to talk about him sarcastically - mainly, because I think it's hilarious, and also just because I don't think that's the face of someone who actually wants to address the pain that they're running from.
- Also, what the hell was Sam going to talk about? How does he sanitize the story of him and Dean for a non-hunting audience?
End of flashback!
Sam: "For the record. The girl. Her name's Amelia. Amelia Richardson. She and I had a place together in Kermit, Texas."
Dean: "Look man, I don't even remember what I said, but uh-"
Sam: "But what? But you didn't mean it? Oh please. You and I both know that you didn't need that penny to say those things."
Dean: "Come on, Sam-"
Sam: "Enough with your crap, Dean. I told you from the jump where I was coming from, why I didn't look for you, but you - you had secrets. You had Benny. And you got on your high and mighty and you've been kicking me ever since you got back. But that's over. So move on, or I will."
- Sam opens with offering information and honesty in the hopes that Dean will do the same, I think, but as soon as he preceives that Dean is going to talk his way out of the subject (which is immediately), Sam's anger about being lied to and being constantly yelled at is back in full force - and he does the thing that Sam always does to Dean when he wants to hurt Dean as much as Dean's hurt him - he threatens to leave.
Dean: "Okay, I hear you."
Sam: "Good. You know. Hear this too: I might just be that hunter that runs into Benny one day and ices him."
Dean: "I guess we'll cross that bridge when we come to it, won't we."
Sam: "Yeah, yeah, you keep saying that."
- And I do wonder if this episode with the specter stayed with Sam - and it was the idea of Benny as Dean replacing him that drove Sam to be more murderous towards Benny than he would have been ordinarily... maybe not... I'm just still trying to rationalize what I see as OOC behaviour for Sam in the upcoming Citizen Fang episode. So, I guess I'll save my guesses for when we cross that bridge.... :P
END!
Tags: rewatch s8
Subscribe