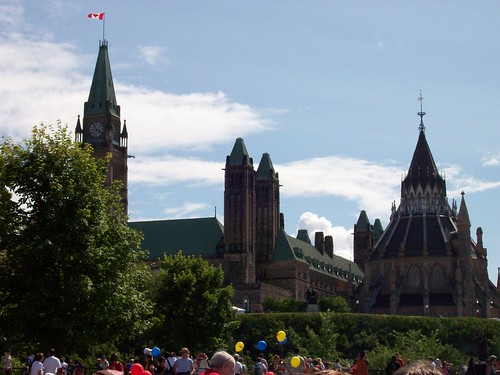 Canada Day is over now. I should have really done this post in the morning...but instead I drove to a parking lot and bought an iPod for $30. Then I came home and played my saxophone in the park...then I had a nap...then dinner (with good beer, of course)...then fireworks.

Actually, if I had video-editing capabilities, I would re-soundtrack an entire Supernatural episode with Tragically Hip songs. I've always thought it'd be really cool if Supernatural did a all Canadian-music episode. Seriously, wouldn't it be cool to have New Orleans Is Sinking play as the Winchesters arrive in town. Boots or Hearts? Blow at High Dough? 100th Meridian? Come on...that's like the best road-trip song ever. I'm so going to play 100th Meridian as I'm driving into Manitoba this summer.

Basically, I just wanted to say that although income tax was a bit of a kick-in-the-pants this year, I do love my country. It is full of amazingly talented people (a Hawksley Workman Supernatural Video would be pretty bizarre, I think, but also awesome.) It is also extremely beautiful.

I'm really looking forward to driving across it at the end of this summer as I make my way to Vancouver. It'll just be me and my younger sister, my car, good tunes, crappy motels, and the open road....and we aren't even expected to fight demons.

(Picture is of Parliament Hill - Peace Tower and the Library in Ottawa - taken 2 years ago, by me)